Until Batman, I was a Marvel kid. Much to my father’s dismay. I had all the Spider-Man books, I got Captain America (because he was “The Captain” because Reagan had pissed him off or something and even at ten I knew fuck Ronald Reagan), but I don’t know what else. Not X-Men. Maybe Hulk? I probably got Hulk.

So in winter 1988/1989 when Avengers #300 came out, I was pretty excited. It was an all-new Avengers team, The Captain, Thor, Mister Fantastic and Invisible Woman, and Gilgamesh. I don’t know why Gilgamesh. Because someone at Marvel who moonlighted at the Strand secretly knew there were some dumb kids out there who’d buy a used copy of Gilgamesh just because of a comic.

I mean, give me a better reason.

I did the Marvel summer crossovers when I was a kid; Secret Wars—especially it being sold in toy stores—trained me. But I didn’t make it to Marvel’s 1989 crossover. Summer 1989 happened and I became a Batman reader and then just a DC reader.

But one of the things about Avengers over the years was the book could support some wacky teams. Scott Mendelson talks about how Avengers 5 could conceivably team-up Brie Larson, Chadwick Boseman, Tom Holland, Benedict Cumberbatch, Paul Rudd, and Evangeline Lilly. Plus maybe Tessa Thompson or Anthony Mackie. Presumably Mark Ruffalo will be in it because he’s given up on range. It’s a good post from Mendelson, who remains the only box office guru person I read. 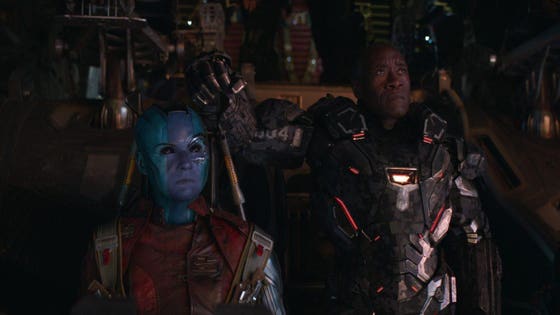 Box Office: Why The Next ‘Avengers’ Movie Could Be Bigger Than ‘Endgame’
Would you get equally excited about a Black Panther/Captain Marvel/Spider-Man/Valkryie team-up movie?
www.forbes.com

Mendelson says three years from now for Avengers 5. Okay. So what about the one six years from now. Disney seems to appreciate Kevin Feige; he’s peerless in what he does. So there will be an Avengers 6, right?

Presumably Fantastic Four will have hit by then, Chris Evans might be ready to come out of whatever “retirement” he’s done (he’ll probably follow Chris Pine to TV but maybe streaming), Chris Hemsworth will have bombed out on his third franchise attempt. But who could play Gilgamesh?

What if it’s the Rock. What if Justice League 2 starring all the popular heroes versus the Rock bombs and the Rock goes to Marvel.

I mean. He was really good in Moana so why not bring that character over into the MCU. If Disney/MCU is that far along, I mean.