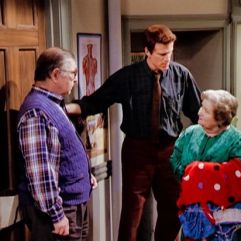 Writer Ian Gurvitz starts off with a bad joke at Alex Désert’s blind guy’s expense, which Désert doesn’t really essay very well either. Funny how the Becker (Ted Danson) rant was the most distinguishing thing in the first three episodes—at least recurring distinguishing thing—and now it’s tired and we’re only six episodes in. Who knew you actually needed content for rants.

Anyway, Gurvitz recovers somewhat with a rather touchy-feely episode about Danson palling up with patient John Slattery; they both like sports. Only Hattie Winston gets sick and she needs the day off, leaving Shawnee Smith to run things. Danson spends the day—or montage (at best, it’s mostly just good Smith moments)—worrying he’s not going to make it to a game with Slattery.

Meanwhile at the diner, Saverio Guerra plays a high school classmate of Terry Farrell’s who comes back to mock her for her station in life. See, she teased Guerra in high school and now he’s back to make her feel bad. It’s a weird subplot. Guerra’s funny. He’s a jerk, but he’s funny. Kind of bad when you have the diner, which has two regular cast members, and they needed to bring in a guest star to get some laughs. “Becker” has got such a weird split between the diner and the doctor’s office.

The end has some heartfelt stuff for Winston and Danson, which is fine. It’s a little saccharine but it gives them both different material than usual and they’re both great so… yay. 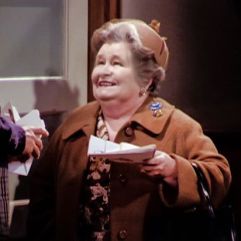 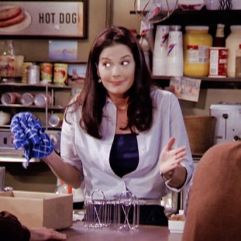