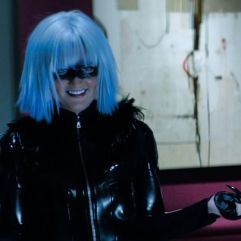 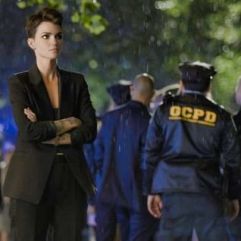 I didn’t pay enough attention during the opening so I didn’t realize Rachel Matthews’s Magpie was going to have the stupid neon wig. Magpie’s the villain from John Byrne’s Batman and Superman team-up issue of Man of Steel. “Batwoman” could score some major points if Magpie was awesome.

Magpie is not awesome. Magpie is incredibly not awesome. The wig, the whole thing (even though the original Magpie was ableist). Not a score for “Batwoman.”

Good thing the show’s got a newly discovered secret weapon—the Batwoman action, with Ruby Rose in the costume, is freaking awesome. Batwoman and Nicole Kang (who plays Rose’s currently estranged step-sister)? Awesome. Rose has got the “in the suit” stuff down. There are still some problems with that stupid narration, of course, but giving her a girlfriend—Brianne Howey from the unappreciated “The Passage”—and some romance and bad dating because superhero stuff? Especially shot on location exteriors in Chicago. Chicago’s a weird Gotham (it’s a Dark Knight thing, isn’t it?) but it works for Rose’s romantic drama.

The dating gives Rose some personality, which nothing else in the show has done yet far. Probably because original apple of her eye was inert Meagan Tandy. Plus Rose and flunky Camrus Johnson are finally getting the rapport down, as the episode involves the incredibly unlikely loaning of Martha Wayne’s pearl necklace—you know, from when she died—to a museum. The show’s Batman legend is either going to be incredibly interesting or incredibly dumb because Batman hunting down his dead mom’s pearl necklace to cherish then leaves it behind when he goes into self-exile. So weird. Though I guess if the show sets its Bruce Wayne up as The Dark Knight trilogy one… it could get away with it. Something. I don’t know.

It’s just silly and not in a good way. It ought to be more creative. Like the Batwoman action, which gives you that wonderful feeling of reading a good seventies Batman comic. Probably with a dumb villain but definitely with some great art. It earns “Batwoman” a special place, at least temporarily. There hasn’t been a good live-action Batman movie in a while. “Batwoman”’s not pushing that limited sub-genre envelope but its definitely considering it. The action sequences might even be cool.

Also… turns out the Dougray Scott part has potential. Not with Scott playing it, but if they’d gotten the right actor, it’d have been something.