Going into this episode, I thought I had the show figured out. It was “‘Major Crimes’ universe,” where white cops could be progressive about gay and trans rights and so on. Still pretty invested in white supremacy, but maybe not as much as usual. And no talking about killer cops. Progressive, just not actually progressing. Going into “All Rise” episode two, I was onboard for the cast and just fine with it.

This episode, “All Rise”—in the first scene—goes all in after ICE. I had thought about how a feature of a “‘Major Crimes’ universe” was no Orange Führer, but it’s all about living in the 2019 hellhole under the Orange Führer. Simone Missick’s judge is going to be a proud activist judge. Last episode it wasn’t clear whether or not the show wanted to be overtly progressive. This episode decides enthusiastically in favor of it, with Black female judge Missick getting together with Latinx public defender Jessica Camacho and—yes, Simone Missick really appeals to Irish ancestors at one point—white district attorney Kelly Frye. They work together to subvert ICE and try to get Camacho’s client, asylum-seeker Roland Ruiz, out of ICE’s grasp with the best possible outcome for Ruiz. It’s women for the win.

But not just women in this episode, with younger white guy Wilson Bethel trying to take down old rich white guy Robert Curtis Brown because Brown bribed a witness. The arc gives Bethel a lot of emoting over his estrangement with his father, as he identifies with Brown’s kid, Ava Deluca-Verley. Sadly Deluca-Verley isn’t particularly good. This episode of “All Rise” doesn’t have that amazing guest star casting from the pilot. No one’s exactly bad… Deluca-Verley’s just not interesting, which might also be the part, but the casting caliber isn’t here.

The show’s still pretty safe just based on the energy Missick and the supporting cast get when the plan comes together. She and Ruthie Ann Miles are downright good together already, which isn’t easy as Miles is supposed to be the irate judge’s clerk. If they get a second season, I’ll bet they even have the gall to proudly identify as social justice… hmm… champions of social justice. “All Rise” isn’t bold so much as forceful. Its progressive politicking is always calculated.

And its lead performances always solid. But it’s too soon to tell if it can get away without being bold about anything. 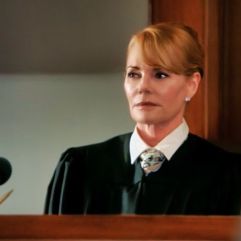